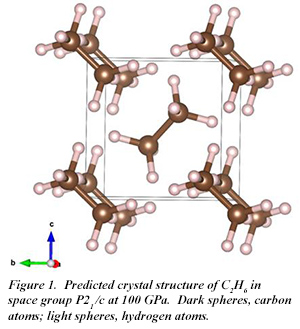 Understanding and characterizing structural and bonding properties of the carbon-hydrogen (C-H) system over a broad range of conditions is crucial for developing new high-strength materials for energy applications.  In addition, examination of the C-H system in extreme environments also plays an important role in the search for new materials with novel electronic properties such as high temperature superconductivity. 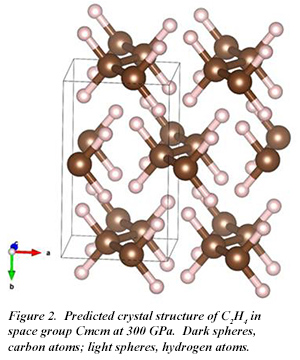 The carbon-hydrogen (C-H) system at ambient conditions forms the basis of organic chemistry, and gives rise to compounds that are the predominant fuels in traditional energy technologies. Despite its importance, however, the behavior of simple molecular species in the C−H system under extreme conditions is poorly understood.  The assumption that hydrocarbons should dissociate into elemental carbon and molecular hydrogen at around 10 GPa has been the prevailing one for many years. 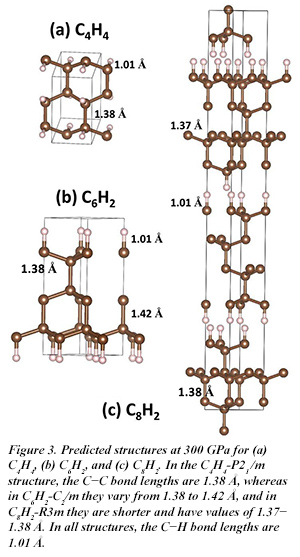 At 100 GPa, a C2H6 phase with P 21/c symmetry is the most stable structure, while a C2H4 phase is also stable. The molecular form of C2H6 is retained in the high pressure solid (Fig. 1).  With increasing pressure, C2H6 becomes less stable until at 300 GPa, C2H4 is the only stable phase.  At this pressure, C2H4 adopts Cmcm symmetry, with the molecular form also retained (Fig. 2).  Even at 300 GPa, Cmcm-C2H6 is an insulator with an indirect band gap of 3.7 eV.