A recent advance toward the goal of increasing achievable static pressures beyond the mechanical limits imposed by the diamond anvil cell has been in the development of “two-stage” diamond anvils. Two-stage anvils consist of a small “micro-anvil” with a culet size on the order of 30 microns fixed onto the culet of a larger diamond anvil with a size of approximately 300 microns. The larger anvil allows experimental techniques that take advantage of the standard but very versatile diamond anvil cell design, while the smaller anvil permits attaining ultrahigh pressures, in some cases more than double those possible with the conventional opposed anvil setup.

A key problem in fabricating two-stage anvils has been how to integrate the main anvil and the micro-anvil together so as to provide the required stability during alignment and increasing the load on the anvils during high pressure experiments. One approach has been to homoepitaxially grow a single crystal micro-anvil onto the culet of the main anvil. An improvement to this method has now been developed by a CDAC group at the University of Alabama-Birmingham including graduate students Gopi Samudrala and Samuel Moore along with Academic Partner Yogesh Vohra and NNSA Laboratory Partner Nenad Velisavljevic from Los Alamos National Laboratory. 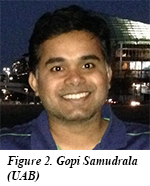 Using maskless lithography techniques combined with microwave plasma chemical vapor deposition, a micro-anvil consisting of nanopolycrystalline diamond (NPD) has been grown on the surface of a larger, single-crystal anvil (Fig. 1a). In this application, the NPD anvil is preferred over the single crystal alternative due to its higher yield stress under compression and higher fracture toughness compared to single crystal diamond. An average NPD grain size of approximately 115 nm provides the micro-anvil with the structural integrity required for ultrahigh pressure experiments (Fig. 1b).

In equation of state measurements on tungsten, osmium and platinum, pressures in excess of 250 GPa were routinely achieved with no plastic deformation of the micro-anvil. The micro-anvils were also observed to support large pressure gradients and shear stresses in the diamond anvil cell [G. Samudrala et al., AIP Adv. 6, 095027 (2016)].