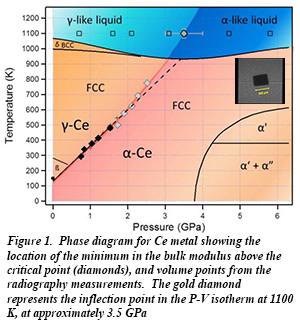 The melting line of cerium metal is characterized by an unusual broad minimum at approximately 3.3 GPa. More recent work has extended the established pressure range of the melt line to nearly 30 GPa, where the melting temperature has risen to 1370 K from its minimum at 935 K.  This behavior of the melting line suggests that two different liquid states exist on either side of 3.3 GPa.  In fact, it has been conjectured since the 1970s that the nature of the isostructural volume collapse in the solid at 0.75 GPa, first discovered by Bridgman in 1927, is related to this phenomenon.

Using the large volume Paris-Edinburgh press at HPCAT Beamline 16-BM-B, Yoshio Kono, Curtis Kenney-Benson, and Changyong Park from HPCAT worked with a group from Livermore National Laboratory to measure the pressure-volume isotherm of the liquid metal up to 6 GPa at 1100 K. The volume of the sample was determined by imaging a rectangular shape of the sample with white-beam x-ray radiography, while energy-dispersive x-ray diffraction was collected to monitor the integrity of the cerium sample with respect to chemical reaction with cell assembly components. 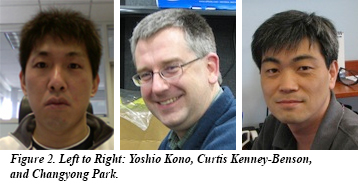 At 1100 K, the P-V isotherm shows a clear change in its curvature, along with an inflection point indicating a decrease in the bulk modulus in moving from the γ-like liquid to an α-like liquid with pressure (Fig. 1). Advanced studies of amorphous materials and liquids are now possible with newly-commissioned capabilities at HPCAT beamline 16-BM-B [M.J. Lipp, et al., J. Phys., Conf. Ser. 500, 032011 (2014)].