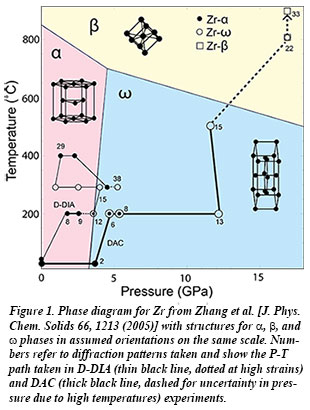 The behavior of the Group 4 metals titanium, zirconium, and hafnium at extreme conditions has received a great deal of attention, particularly due to the importance of Ti as a light structural metal, and Zr and Hf as components of nuclear reactors. At ambient conditions, these metals crystallize in a distorted hexagonal close-packed structure (α) that transform to a body-centered cubic (bcc) structure (μ) at high temperature and a different hexagonal structure (ω) at high pressure (Fig 1). The α→ω transition, achievable by displacing atoms in the α structure, is significant from a mechanistic point of view, since the α phase is ductile and the ω phase is brittle. Details of the martensitic transition mechanisms for α→ω transformation have remained unclear, however.

A group including CDAC Partner Hans-Rudolf Wenk, current CDAC students Pamela Kaercher and Eloisa Zepeda-Alarcon, and former CDAC student Jane Kanitpanyacharoen from UC-Berkeley have recently carried out high P-T diffraction experiments on polycrystals to explore in situ crystallographic orientation development and changes during the α→ω and ω→α phase transitions in Zr. Uniaxial compression experiments were performed in a multi anvil apparatus, the Deformation-DIA (D-DIA), at beamline 13-BM-D of the Advanced Photon Source and in a diamond anvil cell (DAC) in radial diffraction geometry at beamline 12.2.2 of the Advanced Light Source. Radial diffraction, in which the DAC is positioned with the compression direction perpendicular to the x-ray beam, allows sampling of a range of crystal orientations in the aggregate relative to the compression direction. This allows observation of the reorientation of crystal lattices in situ providing details of propagation of dislocations due to plastic deformation. Resistive heating was applied in both the D-DIA and the DAC to help induce the phase transition. 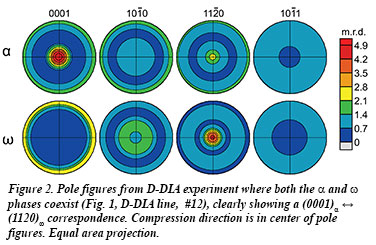 In D-DIA experiments, crystals preferentially aligned with the (0001) parallel to the compression direction due to tensile twinning in the α-phase near 2.5 GPa under non-hydrostatic conditions. Just above 3 GPa at 200°C, the ω-phase began to nucleate with crystals preferentially aligning with their 112¯0 poles parallel to compression (Fig. 2). Similar results were observed in the DAC. This suggests the relationship (0001) α || (112¯0) ω suggested by Silcock (1958) is correct. With increasing stress, the α phase gradually disappeared. Straining the ω-phase further induced a strong ω texture with 101¯0 poles aligning parallel to the compression direction. 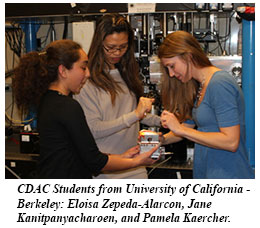 Viscoplastic Self-Consistent (VPSC) modeling shows thatdislocations in the {112¯0} crystallographic planes propagate in the <101¯0> direction, and combined with the basal slip (0001)<101¯0>, explains the lattice plane rotations that produce this texture in ω at high strain. Upon decompression, the ω-phase reverts back to the α-phase with an α texture identical to the previous α texture, documenting a perfect texture memory after cycling through the ω phase [H. R. Wenk et al., Phys. Rev. Lett., 111, 195701 (2013)].