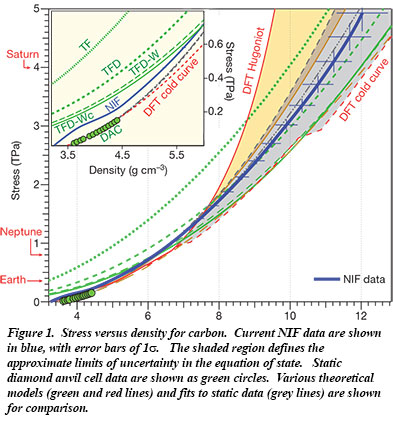 Increased study of the nature of planetary interiors, as well as the current effort to produce inertial confinement fusion, both call for an understanding of matter at ultra-dense states, characterized by pressures in the terapascal range (TPa, tens of millions of atmospheres). The possible existence of carbon-rich planets has created interest in the behavior of carbon at these conditions.  Now, a group from Lawrence Livermore National Laboratory and UC-Berkeley, including current and former CDAC Academic Partners Raymond Jeanloz and Tom Duffy, former Carnegie-CDAC Postdoc Amy Lazicki (LLNL) and CDAC Steering Committee members Jon Eggert and G. W. (Rip) Collins (both from LLNL), has carried out ramp compression experiments on carbon to 5 TPa at the National Ignition Facility (NIF) on the Livermore Laboratory site.

NIF, which houses the world’s largest and most powerful laser, was constructed to realize inertial confinement fusion of hydrogen as an energy source, but discovery science experiments are also provided time on the facility through a proposal review process.  In the experiments at NIF, 176 laser beams converge simultaneously onto a target, which converts the ultraviolet radiation to x-rays; the x-rays ablate the sample and result in dynamic 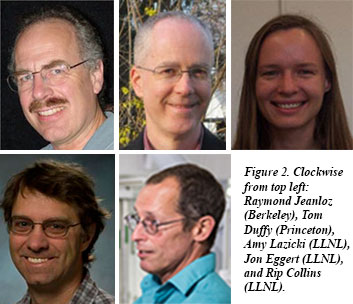 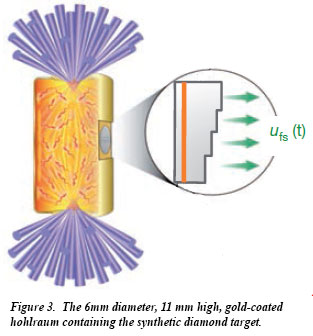 In these experiments, data was obtained on carbon at peak stresses of 2.7, 3.7 and 5 TPa, resulting in a 3.7-fold compression of the material and a density of 12 g/cm3, greater than the density of lead at ambient pressure.   One of the primary uses of the data obtained at NIF is to provide stringent tests of modern condensed matter theory and models of planetary formation. The LLNL team is also collaborating with the CDAC group at Carnegie on experiments on hydrogen and hydrogen-containing compounds to be carried out at NIF in the future [R. F. Smith et al., Nature 511, 330 (2014)].